How to identify the Summer Birds on the Boyne 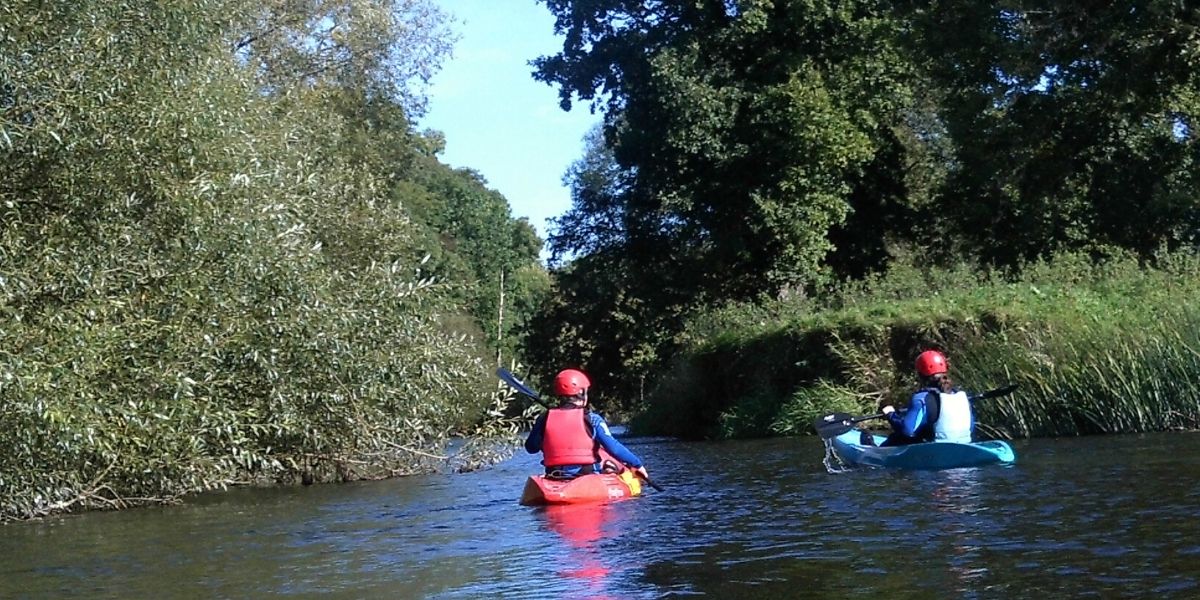 This time last year I did a kayaking trip with Boyne Valley Activities to celebrate my (50+) birthday. I had said to my wife that I would love a trip along the river to take in the birdlife and she booked the trip as a surprise present. It didn’t disappoint, from the start, even in the relative busy-ness of the stretch of river through Trim you get a completely different perspective from the river.

Before leaving the town I was struck by the birds in and around the river especially, Sand Martins, Swallows and Swifts. I have been involved in a local project for several years in the town to conserve Swifts. They are summer migrants that arrive at the start of May. It was great to see the numbers that were high in the sky all over the town. Swifts look black silhouetted against the sky, which is where you usually spot them. They have distinctive scythe shaped wings held straight out from their bodies. The Swift spends almost their entire life in the air and is the fastest flying bird in Ireland.

The Swift is on the amber list regarding its conservation status in Ireland. This means there has been an unfavourable decline in its population in recent years. They come to Ireland to breed and the lack of suitable nest sites has been the main reason for the decline. It is an urban bird and usually rears its chicks on the top wall of two-story buildings, out of sight under the roof. The renovation of old houses and the new spec for modern housing has greatly reduced its ability to access suitable nest sites. We put up nest boxes to support the main colonies of Trim Swifts on Loman Street and Castle Street in 2018. Our resident Swift Champion, Peter Farrell, keeps an eye on these and several other sites in the town. As a result, these birds are doing well here.

The kayak trip also gave me a close-up experience with a bird that is sometimes confused with the Swift, the Sand Martin. The Sand Martin is smaller than the Swift and has a sandy brown head, back, rump and wings, and white underneath. They arrive in Trim much earlier than the Swift. They are usually already here by St Patrick’s Day. They spend much more time flying close to the water here and mainly feed on the insects on and around the river. The Boyne is clearly a good source of insect life and this is also another reason why we have a good population of Swifts here. There is a reliable aerial plankton of insects high in the sky above Trim for them to feed on.

Sand Martins traditionally breed in burrows dug into riverbanks. The straightening of the Boyne in the 1970s would not have helped their cause. With a less meandering river, there were fewer high banks in the bends of the river for them to use as breeding sites. Luckily, in Trim, they had already adapted to urban living. There are many breeding pairs occupying holes in the walls of the Castle, in the Yellow Steeple and in St Patrick’s old school beside the library. I have also seen Sand Martin nest burrows in sand and gravel quarries near Trim.

A trip along the Boyne also gives you a chance to see the third of these similar-looking summer migrants: the Swallow. It’s usually the first week of April when I spot them on the river. They will have just arrived from sub-Saharan Africa. From the level of a kayak in the river it’s easy to see the difference between Swallows and Sand Martins. The Swallow has a glossy blue back and white underside, with long tail streamer feathers. At close range, you can also clearly see their red face, as they repeatedly swoop to catch insects on the river around your kayak. We have great numbers of these birds in both the town and in the surrounding farmland as they are adaptable nesters. They construct a bowl-shaped nest out of mud, which they attach to the roof beams of barns and other buildings.

I wanted to make a return trip with my family in spring 2020 but the pandemic put paid to this. There are also songbirds like the blackcap, willow warbler and sedge warbler which I want to pay more attention to on my next kayak trip. Unfortunately, they will have gone silent by the time we get back to “normal”. This pandemic has heightened everyone’s appreciation of what’s around them. I am hopeful that this will translate into more action to enhance biodiversity. I would dearly love to see the banks of the Boyne return to a more natural state, with large areas looking more like the moat behind Trim Castle. This would allow the return of the Cuckoo, another summer migrant which needs a ready supply of caterpillars. They also need suitable birds’ nests, like those of reed warblers, in which to lay their eggs.

We have a healthy river, and if the habitat is enhanced to resemble how it would have been in the past, we can look forward to even more to discover when canoeing along this stretch of the Boyne.